September 20th, 2021
What's up guys! Zombie Racing here with a bit of a different article for today, and something that I think will pique a lot of interest given the recent breeding announcements. The aim of the article is to try and see whether colts and stallions are being slept on for value and whether they could actually hold the long term value in the platform.

The Current State Of Play

In the most recent Dev Update we saw some pretty drastic changes to the breeding barn rules and how many offspring our boys and girls can produce each month. The restrictions adjusted the number of covers for a colt/stallion from 7 to 3 and the number of offspring for a filly/mare from 2 to 1. Upon hearing the news the market spoke and we saw a sharp spike in the price of fillies in comparison to colts. My best explanation for this is that with so many new users to the platform looking to build out a stable, it's important to have females in your stable as you get to keep the offspring. A lot of the user base started buying up the girls as we can see in the below graphic recording prices from opensea 12 hours after the announcement, where red is a decrease in price and green is an increase. 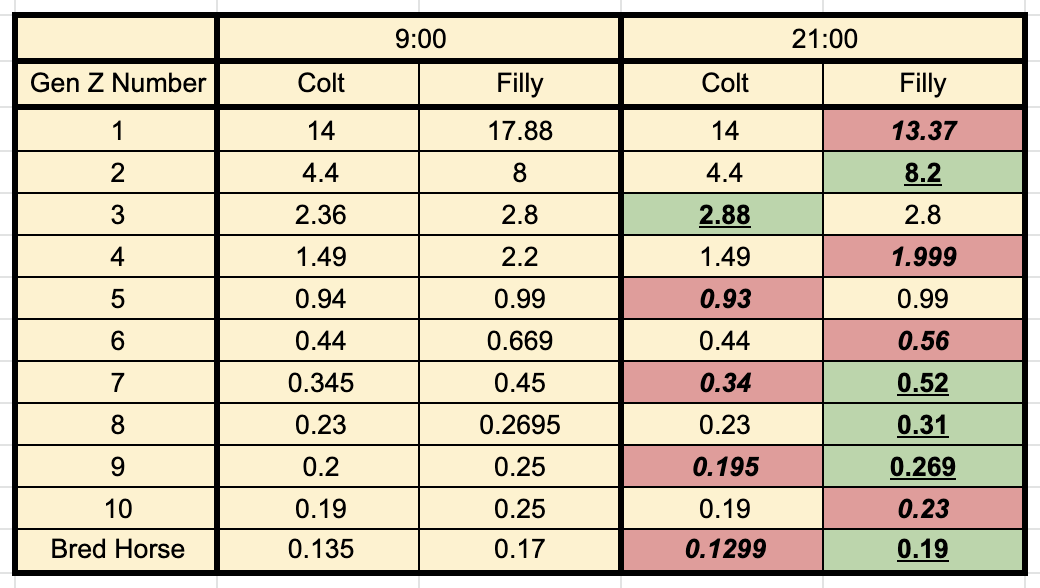 Colts slightly decreased in price and the lower z genesis females increased. The market with the most supply and cheapest entry point is the bred horse market and we can see this shift quite clearly with the floors adjusting the most.

So should we buy up all the girls?

The initial market reaction is clearly understandable. You only need one colt in your stable and 3 females to make sure you keep all the offspring, so the reaction is definitely correct in the short term. But how about long term? While we can look at Nakas thinking they will have no affect on 99% of stables on the game, the principles of the market will pass down to the lower bloodlines as the game goes on. Also, for the sake of numbers to analyse, the Naka market is the easiest to look at.

One of the keys to breeding is the 'infinite exclusive'.  When we look at the breeding chart for breed types, we see that there is a key difference when looking at male and female horses. Breeding a genesis female with an exclusive/elite male will still decrease the breed line to elite/cross level. Contrary to this, if you breed in a genesis male to an exclusive/elite female then you will maintain the breed level, as seen in the below graphic. 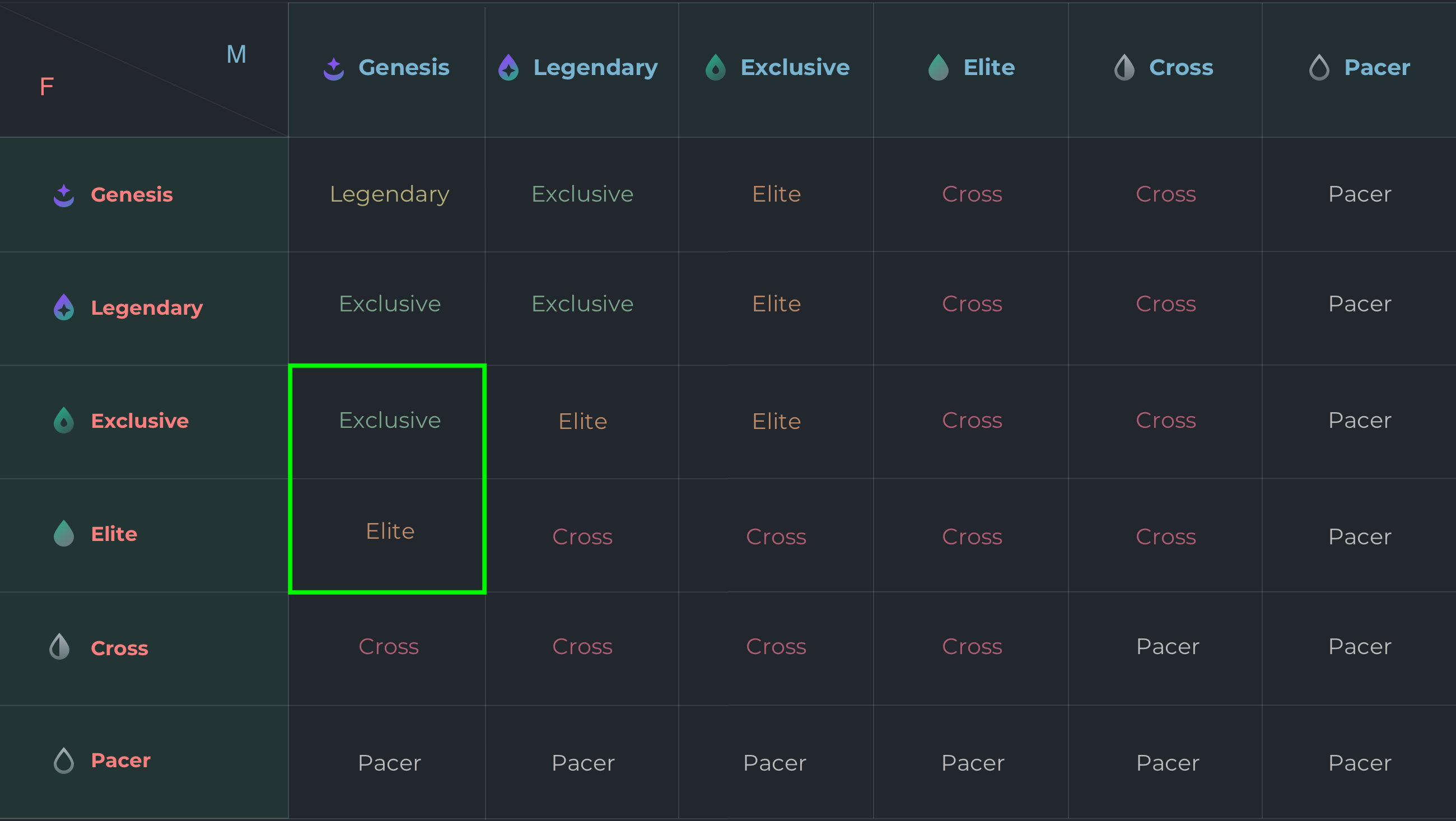 One of the biggest questions I've been asked is should I buy an exclusive naka female and breed in a genesis colt? The floor on these horses has significantly increased as more people cotton on to the idea of infinite Naka exclusives. This made me think of any restrictions to this and the limited genesis naka colt population.

So how many genesis Nakas are there?

Grouping z1 and z2 together, we will have around 1000 male genesis Nakas in the game when all the genesis horses are released. We currently have 918 so we are close to that total right now. Looking at the number that have already bred (the colt/stallion ratio), we have only had 231 breed so far (~25%). That number is surprisingly small and we need to take into account the collectibilty factor of an unraced/unbred Naka when looking at these numbers. A lot of these horses will never see the light of day and a lot have already been 'lost' with wallet keys going missing and early adopters leaving the game. Taking a tentative approach, I predict for the rest of the year we will see a maximum of 350 different Nakas in the stud stable for covers. With each limited to 3 per month this means we are at only 1050 genesis Nakamoto covers per month. However the fillies wanting these covers is going to quickly explode.

Who wants that Gen Naka blood?

The short answer is everyone. The Naka gen blood is strong, and the fillies looking for covers isn't restricted to just the Naka females. However, for the purposes of digging into the data and to answer the infinite Naka question I'm going to look at just the Naka fillies looking to retain the bloodline in their offspring and the highest breed type possible. In terms of genesis females we have 947 in the system already, with 644 legendaries, 572 exclusives and 193 elites. On initial viewing it looks like the number of exclusives is disproportionately high to other breed types, so this adds to the idea that people are breeding in genesis horses at exclusive level to retain the exclusive breed type. Similarly to the genesis colts, there are a lot of female horses that won't see the light of day, although the ratio is a lot higher in terms of horses breeding with 313 mares and 634 fillies (~33% bred). Predicting the number of Naka mares wanting covers, I'm using 400 as the number of genesis and the total number of filly/mares in the system for lower breed levels as the 'unbred' tag is much less valuable here and most are bred already. The total number of Naka females across Genesis-Elite levels is 2356. My prediction is around 1500 of these will be looking for a Naka breed.

How does it look by next year?

Assuming that all the 1500 Naka females are looking for 1 of the 1050 Naka covers, we are already at a deficit. The covers are going to be at a premium from the off. Each month the breeding barn is open, half of the Naka offspring are going to add to the pool of females looking for these genesis covers and the deficit is only going to increase. The below graphic looks at this all the way to January. 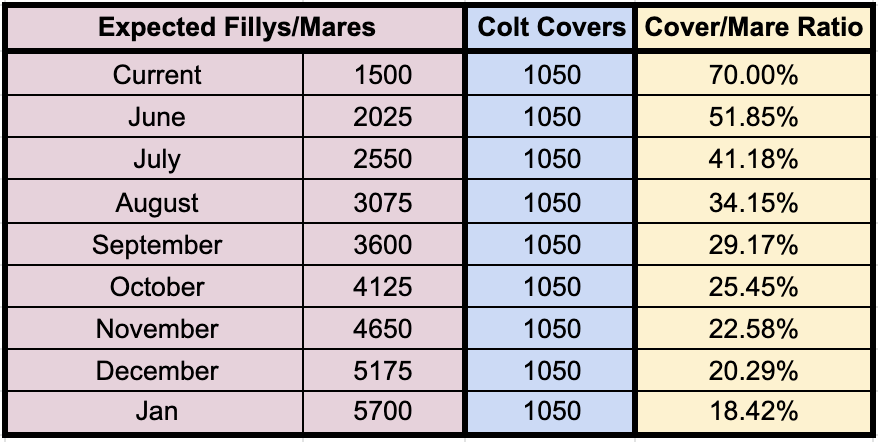 By January we could be looking at under 20% of Naka females receiving a Naka cover. The market price is determined by supply and demand, with demand increasing month on month and a limited supply, the price is surely going to rocket as time goes on. Extrapolating the data on a yearly basis...

Other considerations and assumptions not made in the numbers above

Conclusions, what should a Genesis Naka Colt be worth?

It's clear that the best blood in the game is naturally going to become more expensive as time goes on and rightly so. However, when we look at potential demand from just Nakamoto females go from 70% to just 18% in January, we could see these covers go to the moon quickly and be worth several eth in no time at all. The Zed team confirmed there is going to be an increase to the minimum breed fee of all Nakamotos, but to be honest I think the market will handle this by itself very quickly. This is certainly not financial advice but looking at the supply/demand of the Nakas only, I think we could 'tentatively' assume a minimum market price of 0.5 eth for even the most average Nakamoto z2 genesis by the end of the year. If they're in the stud for a week and all 3 covers are taken that equates to a monthly income of 0.84 ethereum. Over a year that comes to 10.08 Eth! For a z1 its not out of the questions to hit 1Eth per cover, your yearly return hits over 20Eth! The current Naka z1 male floor is 11eth and a z2 4.25eth. Z2's look pretty good on these numbers!

Conclusions - what about other bloodlines?

When people are priced out of Nakamotos, they will inevitably look at Szabos next. With an identical number of genesis horses in the system, and over 93% of their limited supply in the game already, we should see the trickle down affect for these colts to be pretty seismic. Among the community they are thought to be good breeders in general, so we could see the cover market for these go very high very fast too. For Finneys and Buterins the genesis supply is relatively much higher right now and will also increase with more drops to come - there are a much greater number of these yet to be released. What we can take away from the findings above is that as the game progresses, the demand from Legendary, Exclusive and Elite fillies will increase a lot faster than the supply of genesis colts. It is inevitable that all genesis colts will become extremely sought after, but the market will take a lot longer to adjust at this level with a much higher supply.

If you've enjoyed this article then jump into the Zombie Discord and keep the conversation going! I'd love to hear any feedback and continue the discussion!


Back
Write what you are looking for, choose the filters and press enter to begin your search!